SIP vs SWP vs STP – Guide To Investing Right

Systematic Investment Plan (SIP), Systematic Withdrawal Plan (SWP) and Systematic Transfer Plan (STP) are the plans offered by the fund houses which are strategized in a way to suit the need of each of the investors.

A parent aiming to regularly save for his/her child’s education could choose an SIP. A retiree who has received the lumpsum earnings from his PF could invest in SWP and receive regular income. An employee who received a large bonus could invest in a debt fund, but also could reap the benefits of an equity fund by putting their money into STP.

SIP is a systematic and disciplined way of investing, where you are apportioning a part of your salary for your future goals or retirement. By investing at a consistent frequency, investors reap the power of compounding and receive a large corpus in the long term. 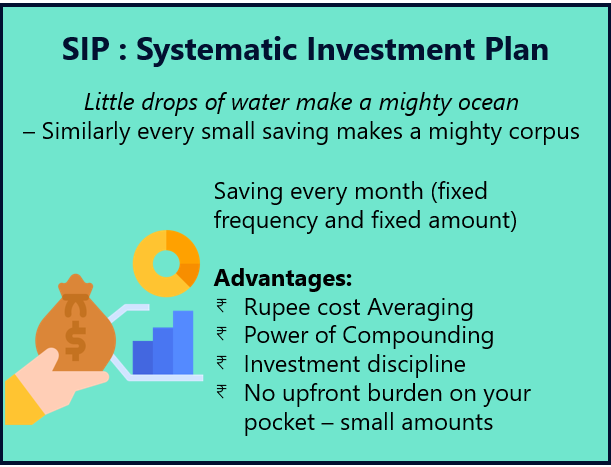 By investing in equity funds that are more volatile, you reap the maximum benefits from the structure of the plan – compared to debt funds which are relatively stable.

Since you are investing at regular intervals irrespective of a market up/down turn, you receive the benefits of Rupee cost averaging – your cost of purchase is average over the time horizon.

Also, as the investment is in small amounts, you do not feel the burden of investing or your future goals forming a hindrance to your present commitments and expenses. There are no tax implications in these plans, and ELSS schemes also provide provision for tax deductibility under Section 80C of the Income Tax Act 1961. 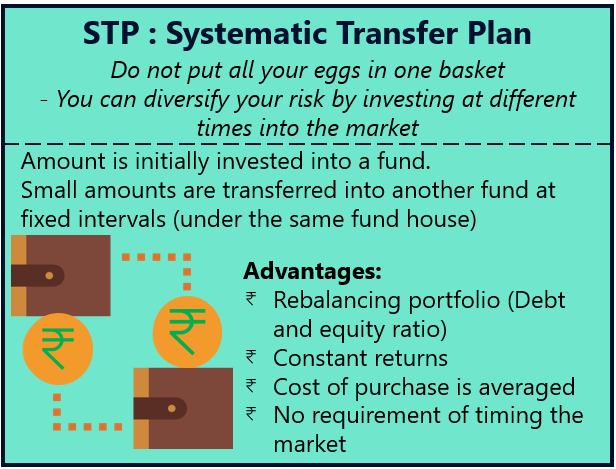 This plan allows you to transfer amounts from one fund to another (within the same fund house). There is typically a transfer of amount from Debt to Equity Fund and is suitable for risk-averse investors who fear market risks and fluctuations.

For example, if you have received a lump sum amount on account of your retirement or as a large bonus, you could invest in a liquid fund or debt fund. At fixed intervals, as an investor, one could give instructions to shift small amounts into an equity fund.

Using this strategy, one eliminates the risk of investing a large amount at the wrong time in the market, thus averaging the cost of purchase. It also obtains the advantage of constant reallocation of the portfolio with debt and equity, earning consistent returns (greater than the amount earned in a bank deposit).

The plan is similar to a SIP, but the amount is invested from your previous SIP instead of deducting the amount from your bank account. These plans do have tax implications. Every transfer from one fund to another is considered as redemption from the fund and is charged capital gains tax (the investor enjoys the benefit of being initially invested in a debt fund but is charged capital gains tax for equity fund – which is lower).

Compounding effects – as returns get reinvested at periodic intervals and rupee cost averaging are also the advantages of this plan – similar to a SIP.

This plan could be considered as an opposite of an SIP, where instead of investing fixed small amounts at regular intervals, one withdraws fixed amounts from the fund. The investor initially invests a large/lumpsum amount into the plan.

One can choose to receive fixed amounts at an instructed frequency (monthly, quarterly) known as fixed income withdrawal, or can choose to only receive the gains (ROI or returns) on the invested amount, which is known as appreciation withdrawal.

One can keep redeeming the amount until the balance with the fund reaches zero which can be considered as maturity of the plan. SWP provides the freedom of choosing the amount that an investor wants to receive calibrated according to his/her expenses, as opposed to a dividend plan of a mutual fund where the fund manager decides the dividend. 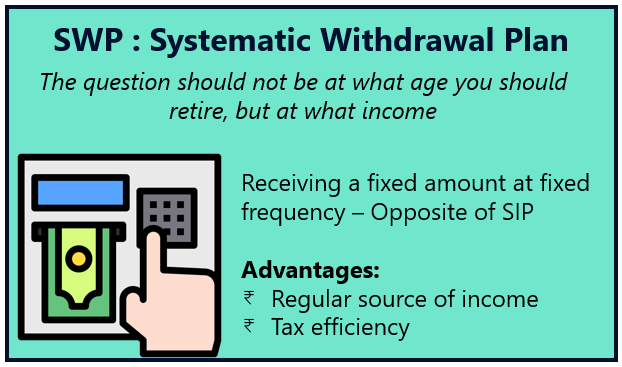 Each withdrawal attracts a capital gains tax as it is considered to be a redemption. However, this plan is considered the most tax-efficient route when compared to the dividend plan of mutual funds and fixed deposit interest accruals.

Consider the example (as shown in the table). An investor has 1000 units in ABC fund and has purchased them at NAV of 30. Hence, his cost price per unit of the fund is Rs 30. Investor has fixed instructions for withdrawing Rs 2000 every month.

The gain made on the transaction is Rs 2000 – Rs 1875 = Rs 125. In a SWP the investor pays tax on the gains from the withdrawal or redemption. Hence, in the above example, one would be paying capital gains tax on Rs 125. However, if the investor had invested the same in an FD, he/she would have to pay tax on the interest income with the tax rate according to the individual’s tax slab (which is greater than capital gains tax).

For over a decade, the Union Mutual Fund has been the Union Bank of India’s investment wing. It has been striving to make its mark and has successfully boosted the economy through investment ventures and achieved...

Mutual Funds: Everything A Young Investor Needs To Know

What is a Mutual Fund? Mutual funds are investment vehicles that pool in money from a large set of investors and invest this net corpus into various asset classes such as government securities, corporate bonds, stocks...

The College Student’s Guide To Budgeting

Budgets help you figure out where your money is coming from and where it should be going. They enable you to spend and save more wisely.

EduFund
Add comment
What Is Rupee Cost Averaging? How Does It Help In Building Your Corpus?